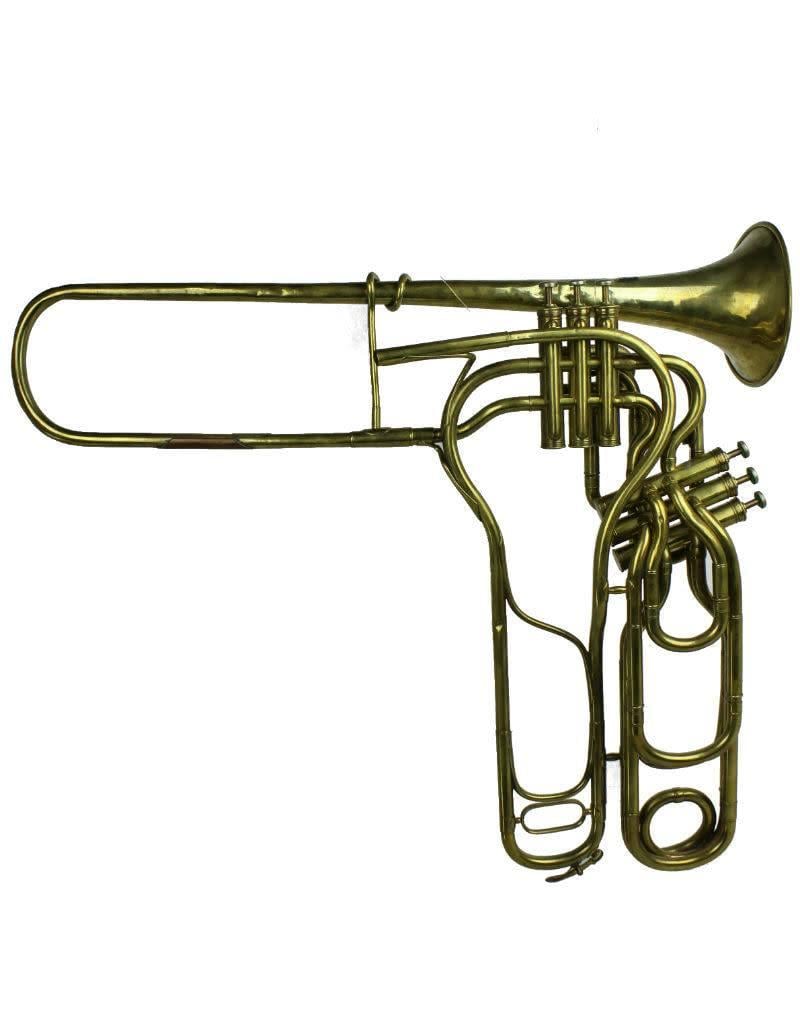 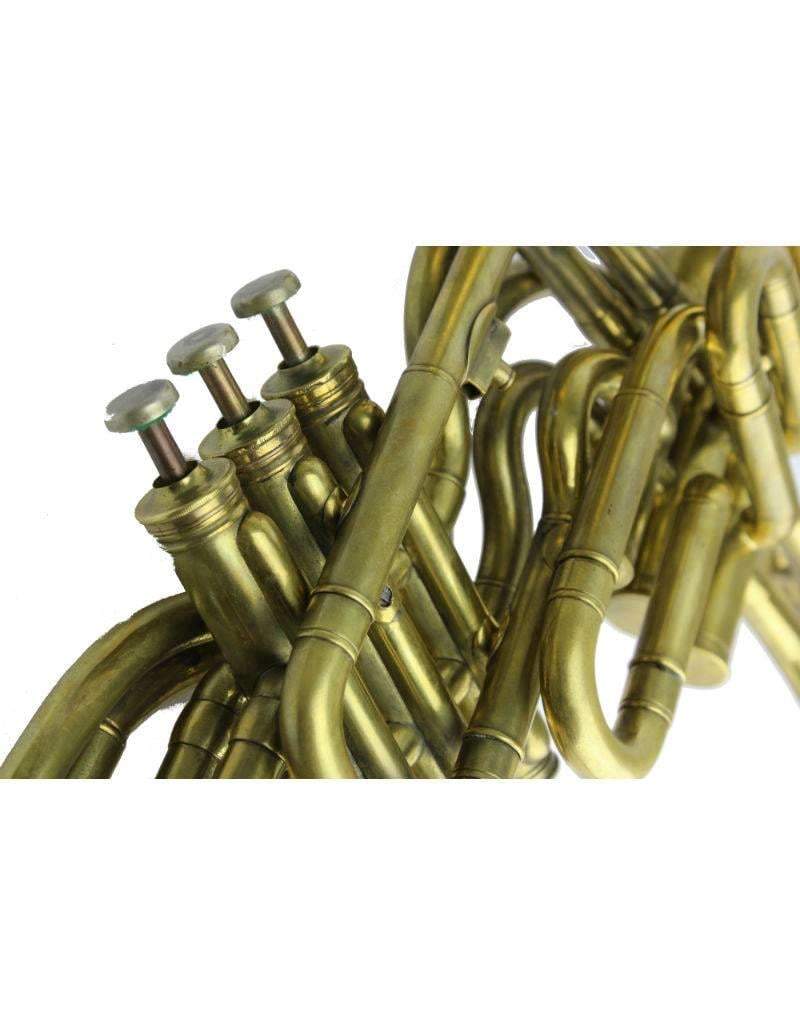 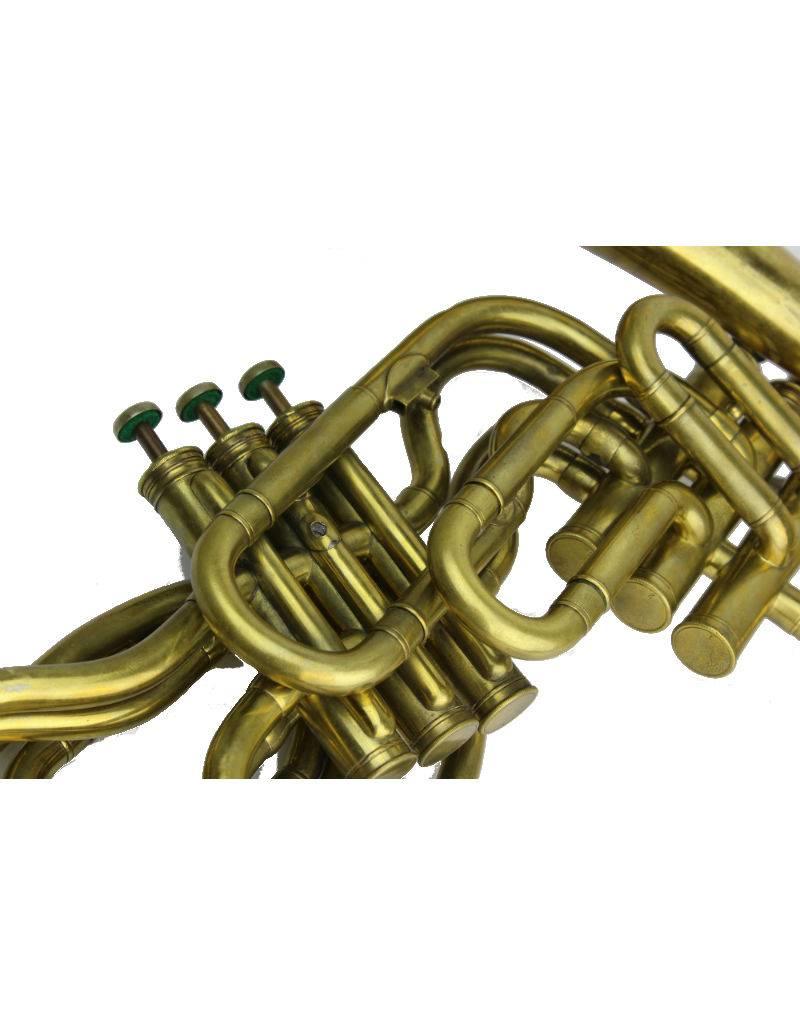 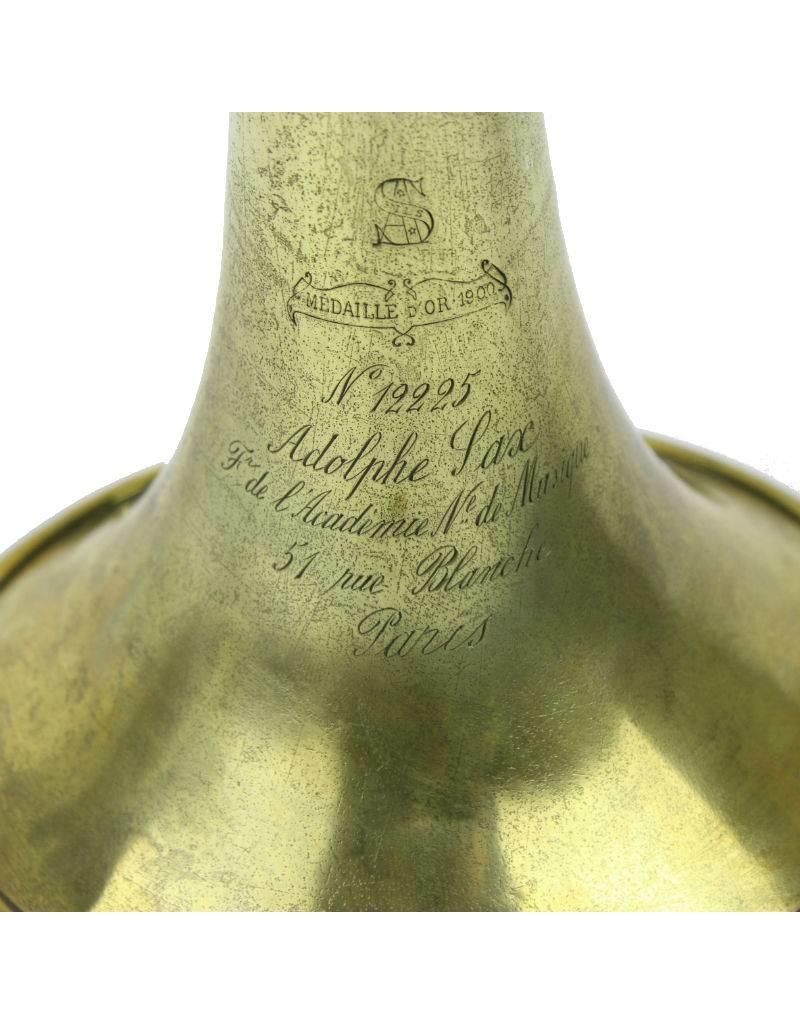 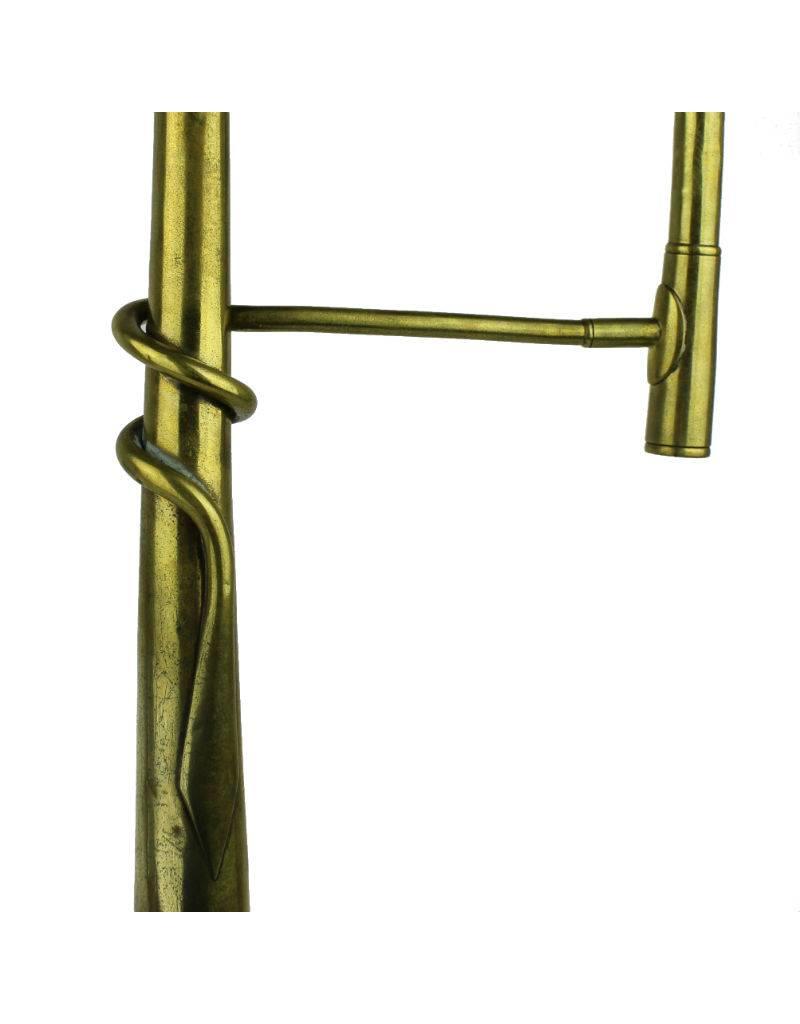 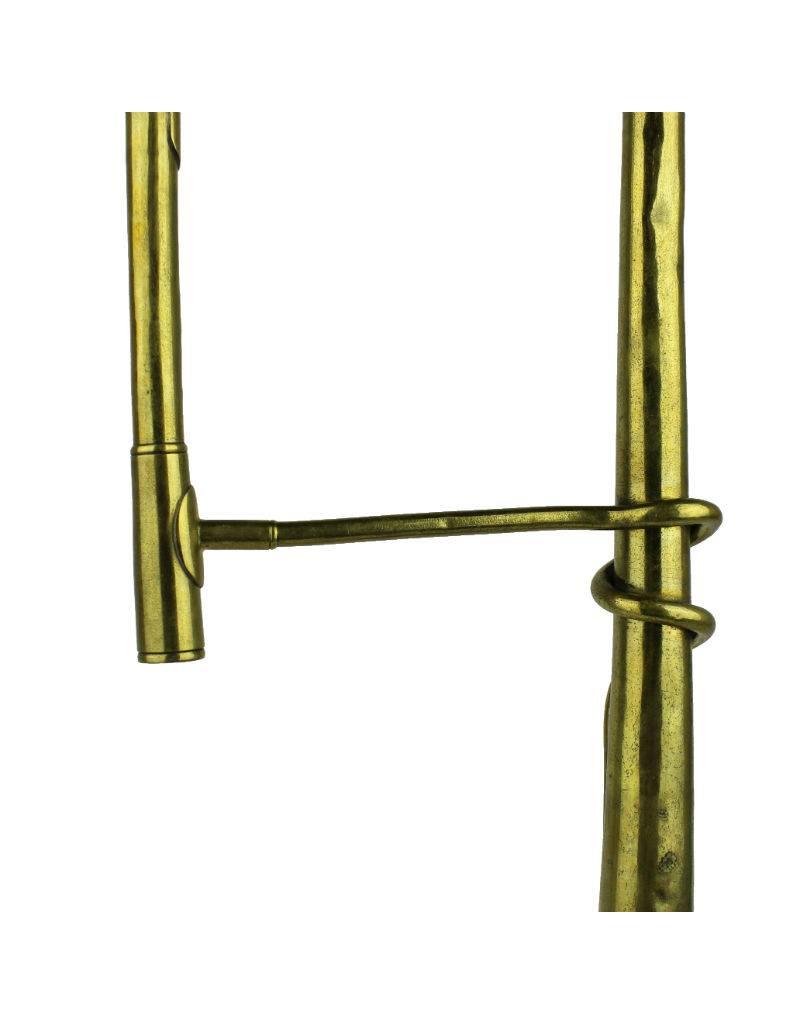 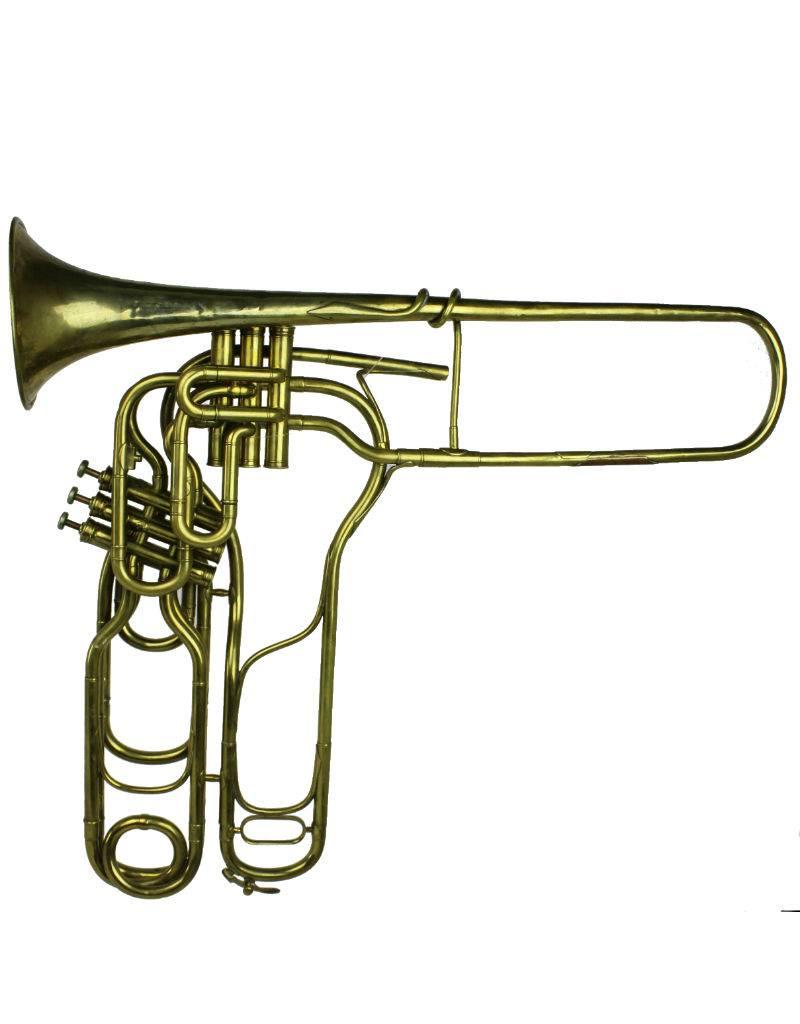 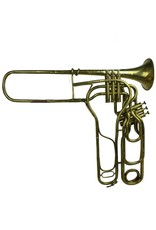 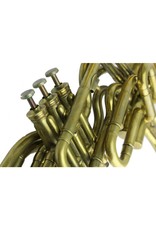 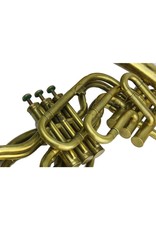 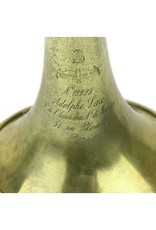 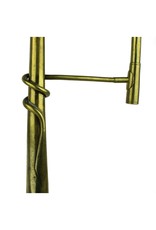 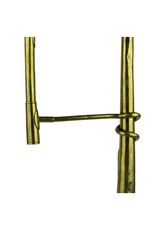 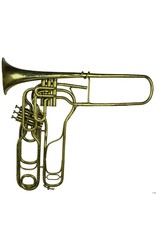 This cavalry trombone was built by Adolphe Edouard Sax, the son and successor of the better-known Adolphe Sax who took over his father's shop at his passing in 1894 and changing the mark to "Sax-fils".

In 1852, Adolphe Sax patented the six ascending valve system. The valves are the reverse of standard valves- by depressing the valve, one bypasses a section of tubing, thus raising the pitch. Each valve functions independently with no need for combination, resulting in theoretically perfect intonation. However, all that piping and having to run through each valve not once but twice leads to a high risk of leaks (not to mention makes the instrument very heavy) and the process was a commercial flop, leading to Sax's first bankruptcy later that same year.

By applying this valve system to a cavalry trombone form, the instrument's center of mass is shifted much closer to the player, making it much easier to hold and carry.

This particular instrument is marked with the serial number 12225, which dates it to around 1895 (The New Langwill Index). However, the engraving acknowledges a 1900 Medaille d'Or prize. Adolphe Edouard used the particular location engraved between ca. 1895-1905, it's possible this instrument was built in 1895 and reworked ca. 1900-1905, was built after 1900 and given an earlier serial number, or it was a composite of an earlier instrument.

The instrument itself is in restorable condition. There are several patches on the bell section and valve section and several minor dents, primarily on the bell and the end of two of the tuning slides. There are leaks causing the instrument to be currently unplayable. The valves are in working condition and all parts are present aside from a remnant on valve 5 that may have been a thumb ring or other attachment. The construction of the instrument is elegant, in particular the braces. This would be a fantastic piece for any Sax collector or museum.